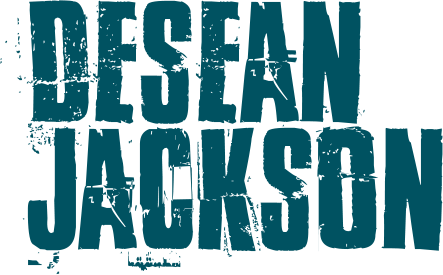 A star wide receiver, DeSean Jackson has been asuccess on the field and in the spotlight for the lastdecade. His hard work, passion, unparalleledspeed, heart-stopping kick returns and raw talenthave made him a 3-time Pro Bowler – the first inhistory to be selected at two different positions inthe same year – and super star on the field. 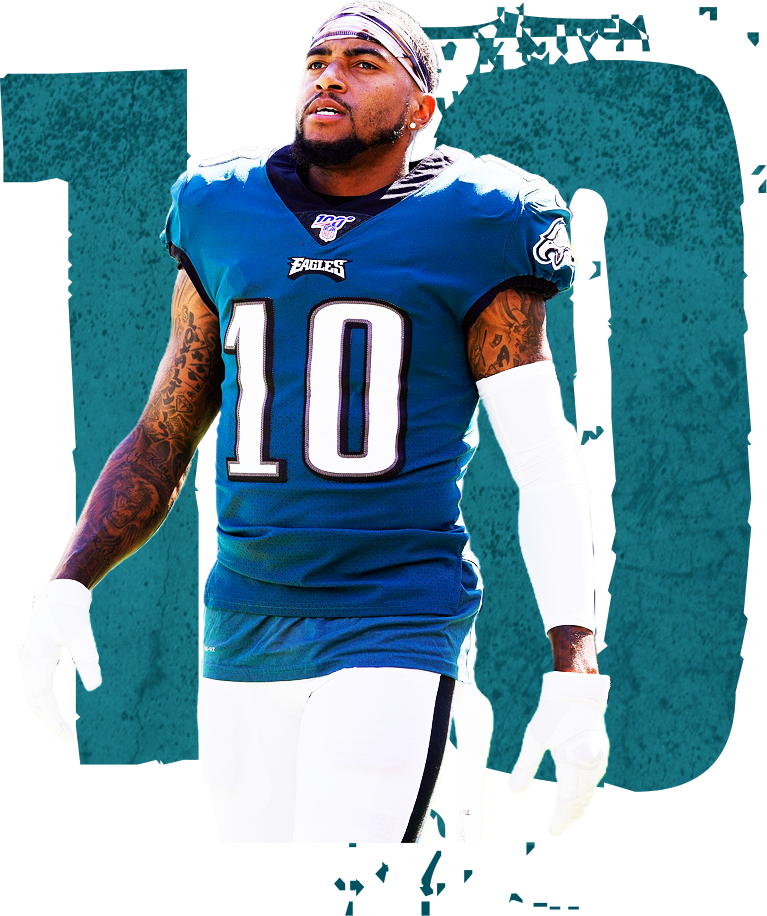 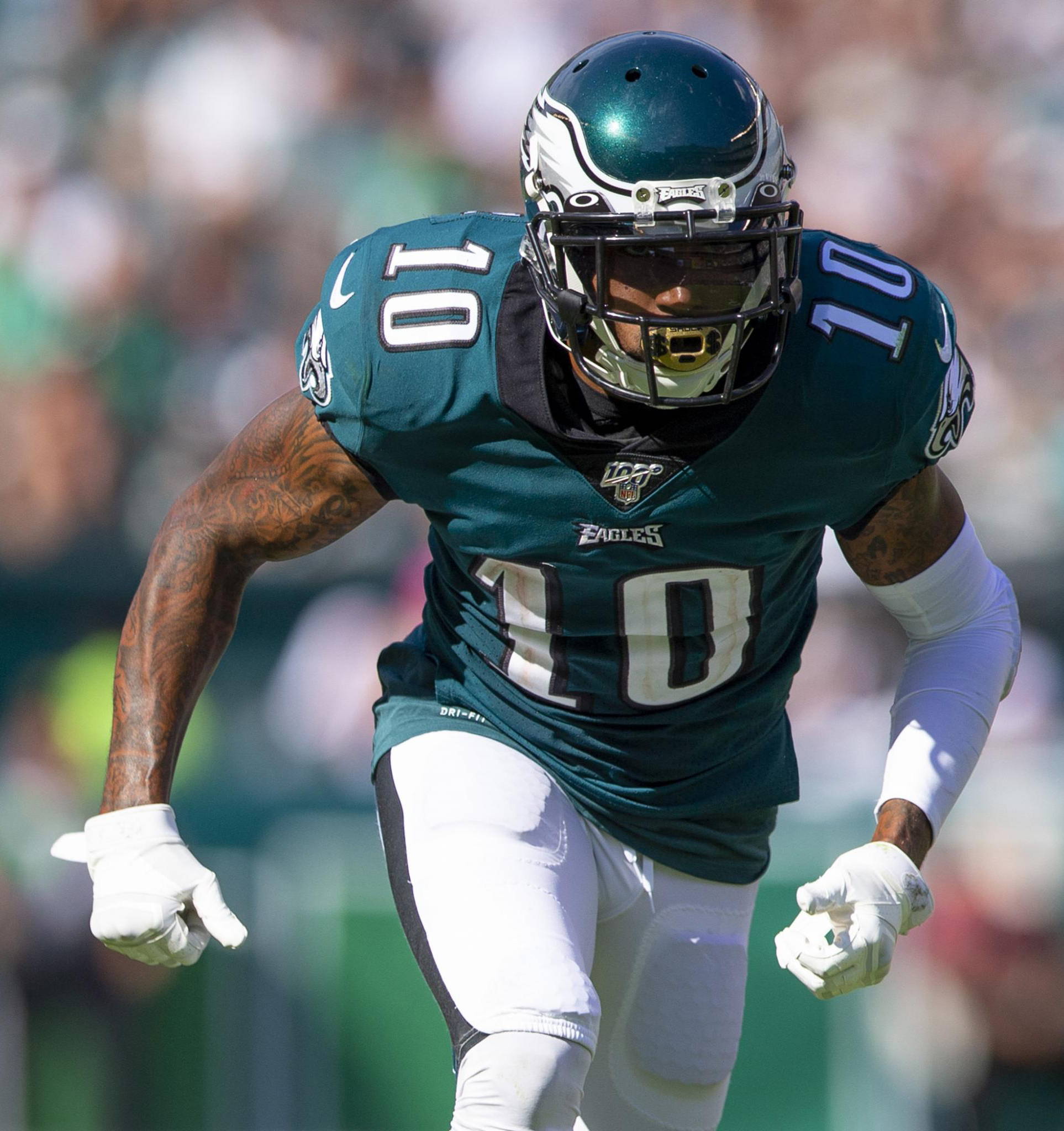 As a prodigy at the football powerhouse Long Beach Poly High School in Los Angeles, DeSean capped off his senior year being named the number four wide receiver in the country. He then moved on to the University of California, where after three seasons with the Golden Bears he departed holding Pac-10 records for punt returns and ranked third all-time at California for receiving yards and receiving touchdowns, and sixth all-time in receptions. Following the end of his junior season in 2007, DeSean declared for the2008 NFL Draft. DeSean’s NFL dreams came true when he was drafted by the Philadelphia Eagles and went on to have an unbelievable rookie season, finishing with two receiving touchdowns and a team leading 62 receptions. He also led the NFL with 50 punt returns (an Eagles’ rookie record and third all time).DeSean continued to shine for the Eagles, appearing in three Pro Bowls during his six seasons with the team.

In 2014, at the height of his career, DeSean parted ways with the Philadelphia Eagles and signed with the Washington Redskins in one of the most publicized transactions of the year. After a stint with the Tampa Bay Buccaneers, DeSean has found his way back to the Eagles in a much hyped move at the start of the 2019 season. 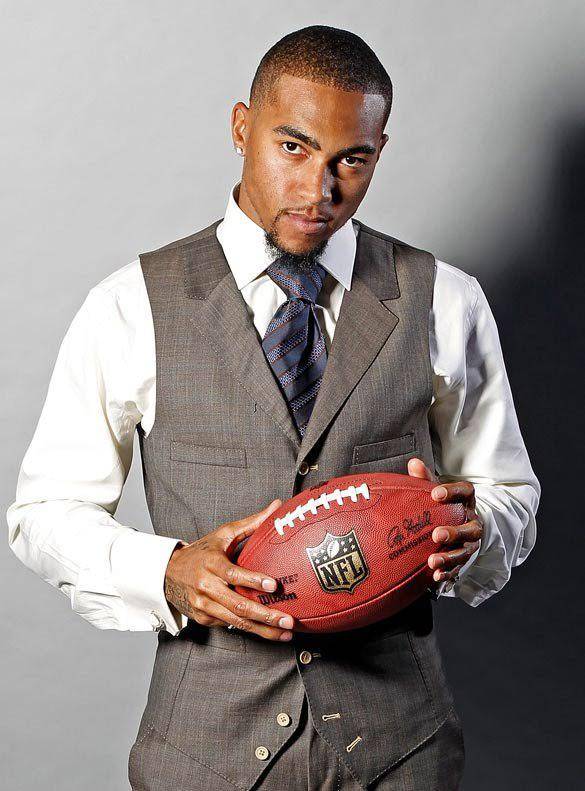 Not only a star on the field, DeSean has made a name for himself off the field in the entertainment world as well. From the MTV Movie Awards to the ESPYS and NFL Honors, DeSean is a red carpet fixture, and can always be seen on best-dressed lists. He is no stranger to magazine covers, having appeared on the cover of STACK, Sporting News Magazine, and ESPN the Magazine, and throughout the pages of DUB, Juicy Magazine, Complex and more.

DeSean has done it all, from commercials to the big screen with his documentary DeSean Jackson: The Making of A Father's Dream ,to guest hosting The View and BET’s 106& Park, to the ESPYS Red Carpet Correspondent for Young Hollywood. DeSean’s interest in the music industry led him to launch his own record label, Jaccpot Records, where he excelled in rapping and producing. He and his music has been featured on MTV, MTV2, Yahoo Sports!, and on the pages of DUB Magazine and ESPN The Magazine.

DeSean’s proudest accomplishments lie in the charity work he does through his foundation, The DeSean Jackson Foundation. After losing his father to a tragic battle with pancreatic cancer, DeSean dedicated himself to helping bring awareness to and raise funds in support of pancreatic cancer patients, helping both the victims and their families. Additionally, DeSean’s foundation aims to assist with a variety of anti-bullying Initiatives. DeSean released a children’s book advocating for antibullying called No Bullies in The Huddle, which has been very well received by the media, consumers and fans 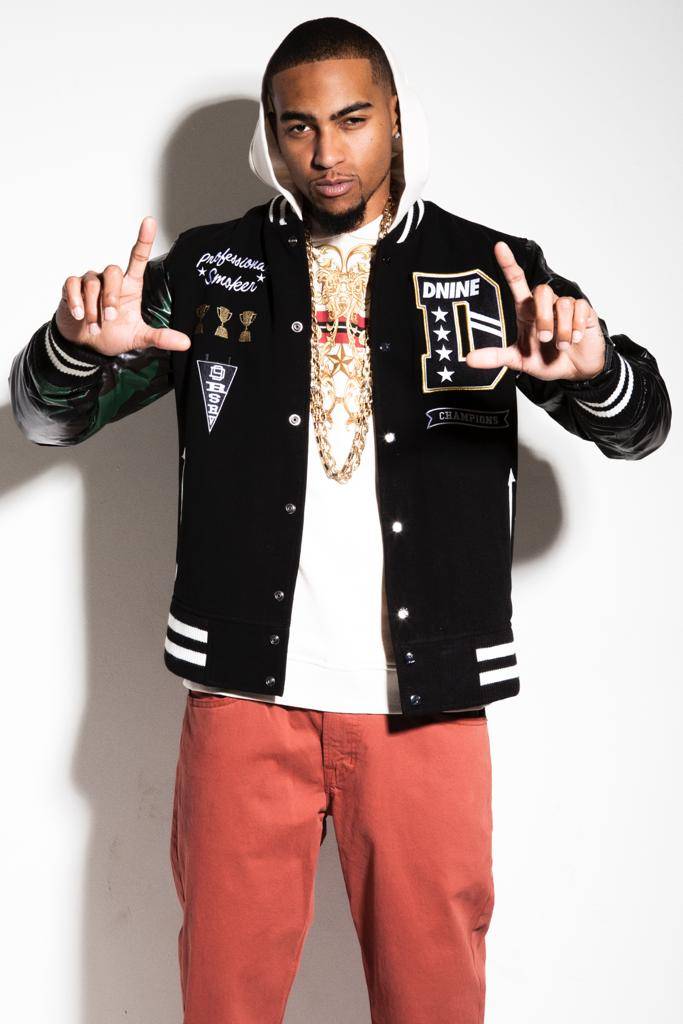 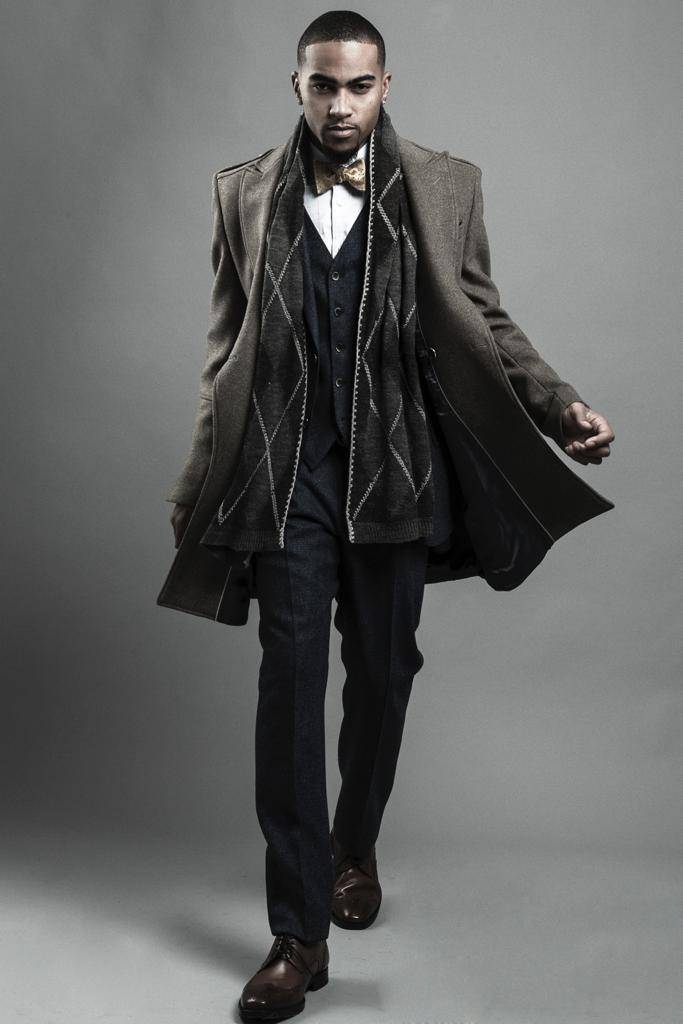 In 2018, DeSean launched the Cali Bears Youth Football and Cheer league, where he works with standout coaches to provide inner-city youth with positive role models on and off the field. The league provides a safe environment that stresses academics, team work and dedication to hard work while also teaching life skills that can help athletes transition into successful adults. With all of the good that DeSean does on and off the field by giving back, his undeniable star power on camera and on the pages of countless magazines, and his ambition to create an empire for himself coupled with his legendary play on the field, there is no doubt that DeSean Jackson will continue to shine as an icon, role model and father for many years to come.

DeSean has graced the covers and pages of major magazines, such as Sporting News, STACK, ESPN The Magazine and Sports Illustrated. He has been featured throughout thepages of DUB Magazine, Juicy Magazine, EBONY and more. 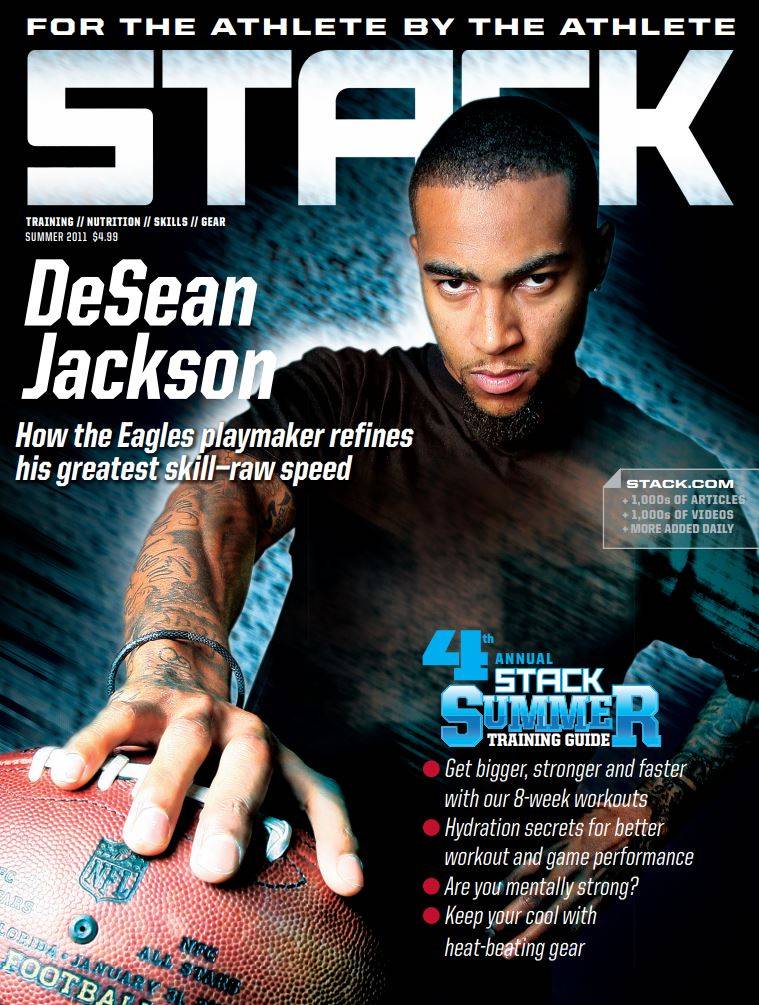 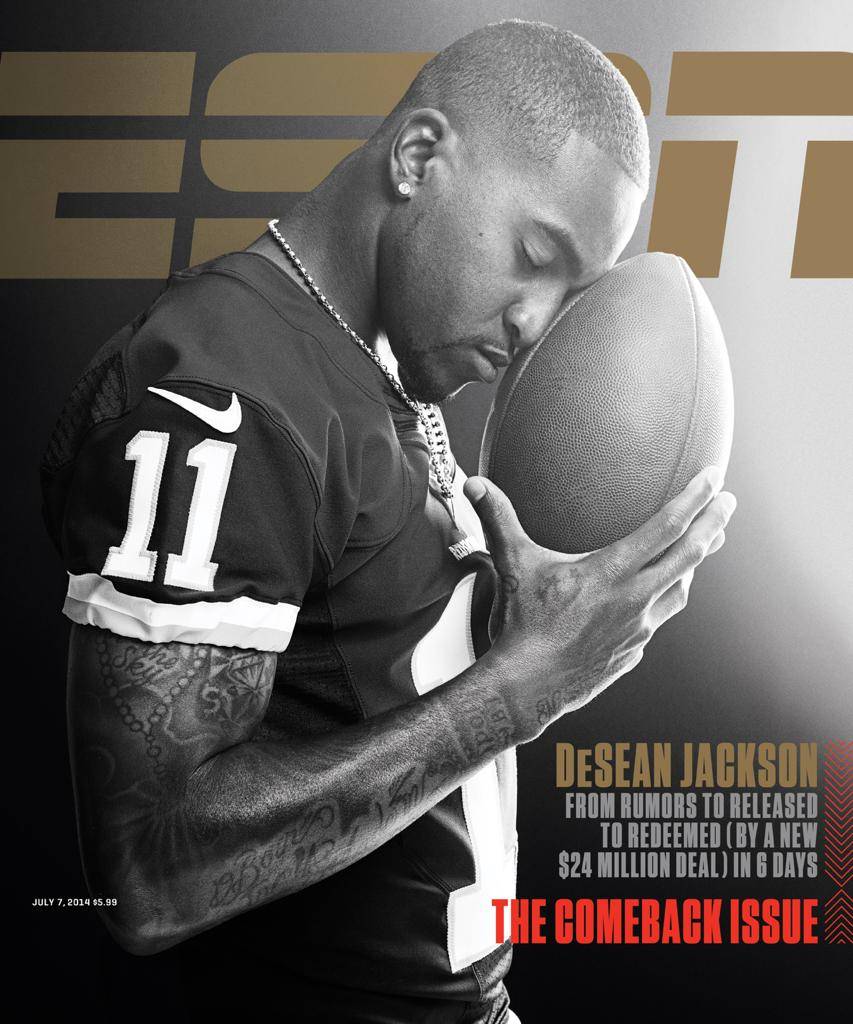